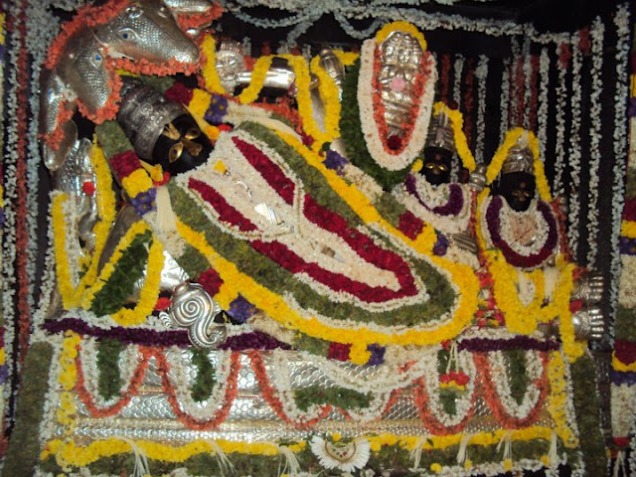 Anantha Chaturdashi is observed on the 14th day of the Waxing Phase of moon (Shukla Paksha), in the month of Bhadrapada of the Chandramana Calendar (Lunar Calendar) in honor of Lord Vishnu in the lying posture (Ananta Shayana) on the bed formed by Anantashesha (Adishesha – the serpent with 1000 hoods). The Vrata performed on this day is thus called Ananta Padmanabha Vrata.

“Ananta” : indicates that which is endless. Shesha means that which remains after everything ends. Lord Krishna in Bhagavad Gita (10:29) “anantahcha asmi naaaaaam” (Among Nagas I am the Ananta). Ananta’s 1000 heads symbolizes Jnana (Knowledge) and heightened state of Awareness. Lord Vishnu reclining on the bed formed by coiling of Ananta, indicates Ananta as a Perfect Yogic posture, uniting opposing forces of Stira (Rigidity) and Sukha (Comfort) Ref: Patanjali Yoga sutra : “Stiram Sukham Asanam“.

Background : When Yudhistra asks of  Lord Krishna for solutions for easing of their suffering and regaining their kingdom and wealth, Lord Krishna advises performing Anantha Padmanabha Vrata every year for 14 years on the 14th Day of Bhadrapada Month, as prescribed in the Bhavishyottara Purana. At the end of 14 years and the vrata has to be concluded with Udyapane.

Seven number of Darbha (Kusa) Grass is tied together to represent 7 hoods of Anantha.  Lord Vishnu is worshipped with 14 types of pushpam (flowers), 14 types of patram (leaves), 14 types of Phalam (fruits). 28 numbers of Atirasa/Kajjaya forms the Naivedyam (Sweet made of Jaggery and Wheat/Rice Flour) of which 14 is given away as daana (charity to Brahmin).

Another important requirement of Naivedya (and all Prasada) is that it has to be soft (maybe it is practice limited to some) – there are no hard sweets or eatables prepared on this day.

Another important aspect of this vrata is the Dora Granthi darane (also called Ananta Daara). Puja is performed with Turmeric, Kumkum, Akshate and other rituals to this sacred thread made of 14 strands with 14 knots which is then tied on the right hand  which acts as a Raksha to the wearer and this is worn until replaced the next year. (In some families unmarried children wear the earlier year’s daara worn by the parents which is replaced by new ones). Generally it is worn on the right wrists by both men and the women (our practice). But there is a practice of women wearing it on their left wrists while the men wear it on the right wrist.

Here is me enjoying the prasada with my children 🙂 after the puja.

May Lord Vishnu Bestow Happiness to all!

All the pictures above clicked after puja performed by Sindhu -ji’s family. She is an ardent follower and Faculty of His Holiness Sri Sri Ravi Shankar of The Art of Living. Admirable fact is that this joint family despite leading a life in a city like Bangalore celebrate all festivals in a traditional manner.

Onam 2013 has turned out to be significantly different compared to the earlier ones that I have celebrated with friends and families in the past. A new insight as I was discussing with a lot of my friends who have contributed to my understanding of the festivities and rituals. A personal thanks.

This may not be the traditional belief, but purely my take and hence pardon my ignorance in case of conflicts with my understanding – a word on what caused it would be highly appreciated.

While discussing with those who celebrate Thiruvonam (or simply Onam as it is popularly known) in a traditional way I could not help be awestruck realizing of the deeper significance of this Harvest Festival and the legend behind it.

Onam is celebrated over 10 days starting Attham (Hasta) Nakshatra in the month of Chingam (Solar Calendar followed in Kerala) and ends on Thiruvonam (Shravana) Nakshatra  (the 10th day) . It is also celebrated by some in the Coastal Karnataka with equal gaiety and pomp.

Mahabali was the King of Asuras, grandson of Prahlada, who despite being born as an asura was known as paragon of devotion to Lord Vishnu. Mahabali was brought up under the tutelage and guidance of Prahlada from whom he imbibed the qualities of devotion and governance.

During Mahabali’s reign, the kingdom never saw poverty, crime or any societal ills and hence revered by his subjects. But Asura that he was, was not considered trustworthy and his ambition made him expand his kingdom and becomes Ruler of all the 3 worlds – an Asura ruler was against the laws of nature. Devas approach Lord Vishnu for a solution and when Mahabali was performing Ashwameda Yaga, Lord Vishnu appears in the form of a small brahmin boy (Vamana Avatara) and seeks to fulfill his desire as promised by the King during the Yaga. Upon which the righteous Mahabali offers to fulfill any demand that was placed by the boy who demands land covered by 3 steps.  Despite warnings from his Guru who foresaw disaster and had a vision that it indeed was Lord Vishnu who appeared in this form to deprive Mahabali of all his belongings. But Mahabali who valued Maana (Honor) even at the cost of his life told his Guru: “I should be the most fortunate one as the Lord, who gives everything to mankind, is seeking something from me.” So saying he offered to donate the Three steps that the brahmin boy sought. Vamana then grew in size so mammoth that one step covered the entire earth, the next the whole of Heaven and there was nothing left to claim for the 3rd step.  Mahabali the man of honor did not hesitate to offer his own head in lieu of land. Vamana steps on his head and sends him to Sutala, the heaven of Patala (the netherworld). It is believed that spot in which Vamana had sent Mahabali to Sutala is at Thrikkakara. The place where the holy feet (Trikkal) of Vishnu touched came to be known as Thrikkakara (Pictures of the Thrikkakara Vamana Moorthi Temple below) 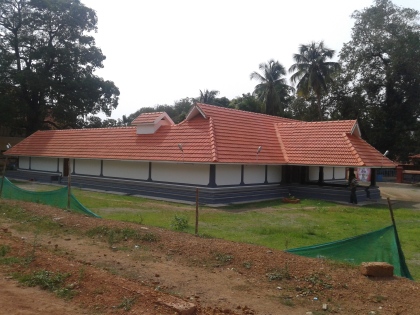 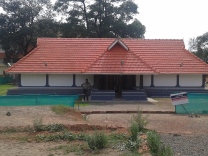 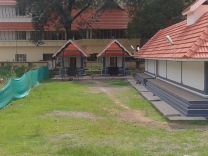 Lord Vishnu also appoints him as the King of Netherworld and also position of Indra for one Manvantara. Mahabali who loved his subjects very dearly also seeks Lord Vishnu to allow him to visit them once every year. And it is this visit that is celebrated as Onam.

The festivities includes ceremonial welcome of Mahabali on the first day. Clay idols painted red (called Trikkakarappan, also called Onathappan) to which all the harvests are offered first thanking him for the Gift of abundance showered.

(When Maveli ruled the land, All the people were equal. And people were joyful and merry; They were all free from harm.).  On the last day of Onam (Thiruvonam), the clay idols are immersed in sea/river with a prayer to Mahabali to return next year.

An essential part of the fesitiviy is laying out of the now famous & renowned flower rangoli called Pookalam. Some pictures below, the way we celebrated with friends

Traditionally each day the Pookalam gets bigger and the 10th day was the grandest one.  And this in itself was an enjoyable ritual for children, thanks to friends who celebrated it traditionally.

And then business part (for me) of any festival the famous, Onam Sadhya (Onam Feast)

Now that the fun part is done, for some deeper significance (May not be politically or even religiously correct but this is what the festival held out as learnings for me)

This festival is the best example of Sanatana Dharma tradition – Even an Asura who is a true Bhakta (devotee) is venerated – Goes to show that it is not the “Who” that matters but the “What”. Being an Asura did not preclude him from being worshipped, his virtues were recognized and aspired for. Which by extension also means there is no concept of Sinners – only people who commit acts of sin. Love or hate the “Act” not the “Actor” It is a value that I alway cherished & forms part of my introduction in the “About” page

Secularism (in true sense, it just means being a Hindu) was an essential part of our Festivals. It was all about revering and honoring the nature. Even the Mahabali song (in red above) indicates the Secular (Hindu way) character. Bharateeya Sanskriti never talks in terms of  “Tolerance” but in terms of “Acceptance” (A bane these days? I tend to think so). I celebrated Onam with Mr. Thomas and family in 1993 while living in Nasik (though it did not include the rituals that accompanies the celebrations, Sadhya was the motive). Not sure if the radicalized society that the state has become, still allows him such niceties

Idols made of clay (I was told it is traditionally made from the soil for the fields that sustains their livelihood) is honoring the land that gives us everything and the immersion of the clay idol finally is to signify whatever we take has to be restored back to nature.

WISHING EVERYONE A VERY HAPPY ONAM

PS: In the Mahabali picture is Sri Praseed an ashramite and an ardent follower of His Holiness Sri Sri Ravi Shankar ji of The Art of Living

[Sri Krishna – affectionate toward His devotees, is partial to a devotee who offers Him merely a tulasi leaf and a palmful of water]

Uttana Dwadashi (12th day in the Waxing phase of moon) in the month of Karthika is Celebrated as Tulsi Puja (or Tulsi Vivaha with Vishnu). It is also called Ksheerabdi Dwadashi Vrata. It is the day where the Chaturmasa vrata ends (Chaturmasa vrata starts on Ashada Ekadashi – Pandarapur Ekadashi)

The story behind this Vrata according to Aparna (my better half):

Tulsi known for her utmost devotion, piety and unflinching loyalty to her husband, Shankhachuda makes him extremely powerful. Shankhachuda falls into evil ways and starts harassing the world but was invincible due to Tulsi’s austerities. He has a boon that he can be killed only if chastity (Pativratata) of Tulsi is violated. Bhagwan Vishnu appears in the form of Shankachuda and Tulsi mistakes her for her husband and serves him as loyally as always. Tulsi’s chastity and loyalty thus gets diluted making Shankhachuda weak and gets killed. Tulsi realized her folly and immolates herself on a pyre. Despite the devotion towards Bhagwan Vishnu she was distressed that Bhagwan was stone-hearted to trick her and curses Him that he turns into a black stone – Lord Vishnu thus turns into Saligrama stone. Saligrama origin is in the River Gandaki and Saligrama has perpetual Saanidhya or proximity to Bhagwan Vishnu. And Tulsi has perpetual saanidhya or proximity to Maate Lakshmi. After the ceremonial rituals of offerings, Bhagwan Vishnu (in the form of Gooseberry plant) and Maate Lakshmi (in the form of Tulsi) is married and the Karta of this pooja is believed to have performed Kanya Daana (which is considered to be one of the most meritorius acts) in human life. This also marks restart of marriage season for Hindus after the brief hiatus during Chaturmaasa.

It so happens that Tulsi maata, before self-immolating curses Bhagwan Vishnu to suffer separation from his wife (Curse gets effected in Ramayana where Bhagwan Rama and Sita are separated).

Bhagwan Vishnu however blesses tulsi to take the form a Tulsi plant and insists that she forms an essential part of worshipping Him. He takes the form of Gooseberry plant and marries Tulsi. It is believed that Tulsi was born as Rukmini and marries Lord Vishnu’s incarnation – Krishna on the 12th Day (Dwadashi) on the shukla paksha (waxing phase of moon) in the month of Karthika. Tulsi puja is celebration of this marriage.

Worship include lighting of lamps with Ghee Wick held in a Gooseberry and Deepa-Daana (Donation of Lamp) in the evening. Gooseberry Stalk along with Tulsi plant to signify Bhagwan Vishnu and Tulsi and the usual Puja samagris.

Thanks to His Holiness Pujya Gurudev Sri Sri Ravi Shankar ji after a Blissful Art of Living Satsang in Jeevan Sandhya Home for Aged, what better way to sign off the day – with Tulsi Puja