Here are some startling yet very useful facts sent across to me by Sri Madhava Hebbar, which I thought everyone should know.

Team Desi Milk (TDM)  is an arm of Sri Sri Institute of Agricultural Sciences & Technology Trust (Bangalore Chapter). With its resources / re-research, has been in service since half year now. The experience of the sourcees has been in tandem with the re-research as per our scriptures of Charaka Samhita and the research done by Brazilian Breeders of Indian Cows. Brazil happens to be the worlds largest INDIAN COW BREEDER..while our cows are despised in our country and mercilessly slaughtered to export its high fiber red meat… Our cows which are most evolved of the species are now famous in USofA & AUSTRALIA (Brahmani Breed) and GIR, ONGOLE, RED SINDHI, SAHIWAL and KANKREJ in South Americas…so be it.

Coming to the point….

There was commonly one breed of cow…which split into two before 2,00,000 years before… one was for the cold climates and other for the temperate and tropical climates… now they are named as BOS TAURUS  (BT) and BOS INDICUS (BI)… BOS indicus is the breed of cows which was meant for Our Countries climate… it suited the indian geneset..be it the north of india or the south… we have around 64 types of BOS INDICUS species..and are most evolved when compared to Euro Breeds like BOS TAURUS. 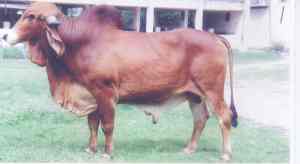 BOS INDICUS (BI) cow milk contains fat that is digestible.. that means obesity or coronary illness due to consumption of this milk is ruled out!

BI Cows Milk contains more calcium and pottassium… that means it helps mothers who loose calcium during delivery to cope up and normalise calcium levels in bones easily. It helps the IT GEEKS and NERDS to normalise the pottassium levels in brain..as they sit endlessly addicted to Computer screen which radiates alpha beta and gamma rays..how much ever eco friendly they screens are!.

BI Cows milk contains more melanin (almost nil in euro cows) which helps build defense mechanism in children and youth… if one consumes milk regularly for 14 years..they can live without milk for rest of life!… and also ONE GLASS of BI milk is equivalent to THREE GLASS of BT milk!

Curd made out of BI Cows Milk stays longer than that of any other milk.

Research says… BI Cows milk is best suited for our geneset… that is… any other milk can alter the geneset of our generation or the genext…and thats what has happened…. genext though has more progressed geneset… they fall trap to unknown diseases… mostly psycosomatic disease..or the disease of the mind order!… and this has been happening… country has highest IMPOTENCY RATE among youths!…47%… we are the worlds largest in terms of DIABETES!.. Bhatinda which was wheat capital of Bharat is today Cancer capital of Bharat… ! we have a train (Cancer Xpress) running regularly with patients from Bhatinda to Bhopal!…all because punjabis gave away SAHIWAL breed of Indian cows and started drinking JERSEY cow milk!..and well gave us chemical laced wheat..deko karma cafe mein MENU nahi hota…u get wot u deserve!.. YES milk is the base for upkeep of chromosomes… we got to merge ayurveda and alopathic studies together to really know how to carry on in the future… any doctors around the corner!?

Ultimately BI cows milk, helps bone remain bone (u can be assured that brittle bones will never occur in our genext).. brains function properly among hi-fi IT nerd…who presses command Z to undo when his/her things fall on ground!… most importantly its not just milk..we are all saving INDIAN BREED OF COWS from going extinct. By this we are getting natural manure upto several thousand tonnes..which helps growing organic vegetables with least expense…! Today ur all getting milk…imagine u will get vegetables which are chem-free along with milk down the lane… ultimately earth is ours..all the being on earth are ours…any single thing altered due to greed based economics will harm rest of the generation…and surely they will question back…! so as guruji puts it..let us leave this planet a better place when we leave..its not just about our kids..our home…its earth as the FIRST MOTHER..without her our mothers are mummies!

Ask a child today…where do u get milk…most would say “in a packet”…during our times as kids we knew COWS and BUFFALOES gave milk…ha…but now those kids who live in condos think MILK comes in packet like Maggi Noodles do!… 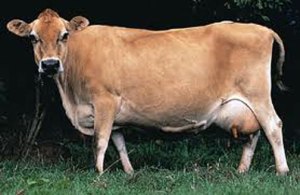 Well, packet milk mostly contains JERSEY COW milk which is BT milk…along with this they add BUFFALO milk… and to preserve them large ammounts of BAKING SODA…and to preserve them for longer time… they add HYDROGEN PEROXIDE (just go buy 250 ML of hydrogen peroxide from a pharma…and apply it on cuts or on heel cracks and see what happens!… u will see white froth coming out of the cuts – imagine that on your intestines and other internal parts where milk goes! – thats how even kids get urinal tract infection or even the kidney fails!…)…now this is what u get in NANDINI KMF MILK PACKS… 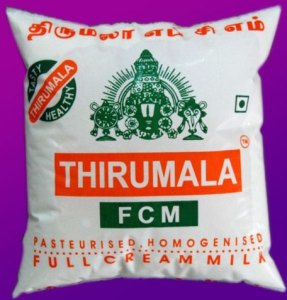 Come to DODLA or HERITAGE..they add POTASH to thicken the milk…. come to TIRUMALA milk..they add detergent powder to the milk…o yes their package design is mast mast..their ads are mast mast… HH Pujya Gurudev Sri Sri Ravishankar ji of Art of Living aptly says… dont get excited by the lovely cover of a present…look in!… we all seem to have stuck to the outward appearance…JERSEY cows are real good in appearance..those lovely polka dots… no horns..no dewlap…but their milk needs preservatives!…which are hazardous chemicals… look what we have been feeding our young ones with…MOTHER GIVING POISON to kids…is that our dharma or is that our KARMA!… lets rethink..this is what packet milk is all about…good shelf life!… UHT..ultra heating technology..that kills all the friendly organism in milk… usage of MELAMINE…to whiten the milk… and melamine will get stuck to our intestine..and we will send ourselves or our kids to multi-speciality hospital!… well all this has been exposed in the media… TV 9 carried this for long time..and stopped it suddenly after they accepted monies from rich and greedy MILK DAIRIES!…

Do we know that in well known private diaries yield of milk is more because they insert a stick into the anus of cows and make them give milk forcebly?…Guruji says… any food product that comes out through violence has toxins formed due to emotional negative impulses!… thats exactly why he gave us sudarshana kriya… toxins begot thru air and food goes out of EXCRETA..but toxins begot thru negative thoughts or emotional negative impulses thru torture and stress can only be cleared thru BREATH!… infact HUMAN LIFE depends on number of breath…. plant life depends on number of star rains!…and u know cow is an herbivour… behold..do u know that 10 lac cows were slaughtered in EUROPE during 1995…reason was..they fed cows with flesh crumbs!…so that yeild increased!..greed based economics in action..after feeding cows with flesh crumbs..for 30 years nothing happened to cows…but after that MAD COW DISEASE came into being… by altering natures way.. we create newer disease..this can happen to our kids, our genEXT… so its better to consume the cows milk which is suited for indian climate… and INDIAN COWS are suited for indian climate..not european jerseys…let europeans have it..they need to store fat because of cold climate…not we who live in temperate and tropical climates… let us understand this fact.

Apathy of our Government amazes us..they dont give loans to farmers to buy INDIAN Cows!…they give loans only to buy EUROPEAN breeds!… because the government runs on kickbacks..its not about which party rules..its about our SLAVE MIND SET…british knew this…. they took all our cows and gave us unfit euro breeds…now USofA sells INDIAN COW milk (A2) for higher price than their own breed of EURO or BT cows!…ditto Australia..ditto NZ… British thus fiddled around with our GENE-SET.

But well… SSIAST SCB..which started its co-op organic farm by bringing in small farmers to do chemical free farming..was about to start their own DESI COW GO SHALA in Kanakapura… with an invest ment of Rs 50 Lakhs… most of the investment came from Volunteers themselves…bevy of 7 committed volunteers and two agriculture teachers.. then came a thought..in the area such as Kanakapura – Sathanur – Kollegal where chemical farming had not come into being…and environ was full of rugged terrains..there were battalions of DESI (BI) cows… total of 2.8 lac INDIAN COWS are in this area..fortunate are we..that JERSEY COWS do not survive in these hilly terrains…these are INDIAN COWS called HALLIKAR…they are known as most disciplined MOUNTAIN COWS…to give milk they got to walk atleast 8 kms a day… they are so disciplined that..they wake up early morn… give milk to their calfs..then to their owners…and walk into forest and plains full of herbs and pastures… and after grazing…exactly by 5.30 pm they walk back to their homes…!…yogi cows..they walk for us!… while we talk the walk…they walk the talk..ha.

So the milk u get is laced with BRAHMI… ASHWAGANDHA… and other medicinal herbs!..what u drink is how u think..ha.

What is TDM doing about it? What is support we need

Eitherway…So TDM came into being..instead of having our own goshala..we thought we can start a cow collective of INDIAN BREED…and now we have over 20 villages participating in the movement.. they are paid every 15 days..if you are TDM product consumer please dont delay your payments… there are 300 farmer members in this embryonic movement and 150 sources (thats u all)… we pay 60% of what we get… 10% goes to SSIAST…10% operational expenses (all volunteers are paid, though initially its seva – many of the volunteers have given up their good jobs and come to help save the bio-reserve…thats a very good sign..and age group of 21 – 27..its a wow experience)…walking the talk… and other 10% goes to newer collectives… rest 10% is contingency..yes TDM has a mission path set for 3 decades..TDM has expertise to breed INDIAN COWS scientifically… according to stars…well westerners call it BIO-DYNAMIC… but we call it PRAKRUTIK…simple. Wish our seers and rishis of yore knew ENGLISH…lol.

So… now u know..hopefully..its not just about milk or cows…its about how we were all mislead to think that european cows are the best (scientifically they are yet to evolve completely)… did we know that when AMUL movement started… we lost 8.9 lac indian cows!… now the same state GUJRATH is importing INDIAN COWS from BRAZIL (3700 of GIR cows – one u see in Bangalore Ashram)… hope lets all get together and stop such foolish acts in future..we have borrowed this earth from our offsprings…we got to give it back in much better shape.

O yes..last point…once we break-even in milk channel..automatically CHEM FREE vegetables will come along with milk….thrice a week..and choice of veggies will go online… we will all get together and organise the agri sector..the thigh our govts are dillydalying with so that some phirangi dalal will take over agri-sector…like what monsanto is doing..buring our indigenous seeds to promote their impotent GM seeds…do u know that seeds begot from GM crops cant be resown !..LETS NOT YEILD NOW..food security bill is another anarchic situation, situation that brings about MANUFACTURED DEMAND… caution!