It is funny that in a country like India spirituality is talked about as a hoax. How can something which is so obvious, which is part of millions of people, be taken as a hoax? Spirituality is not a halo of the few, it is the breath of every human being. Have people forgotten that freedom was achieved through spirituality as the prime means by Mahatma Gandhi?It has become a fashion with journalists to blindly continue the colonial tradition of calling Hindu spiritual leaders a hoax. They called Mahatma Gandhi, Vivekananda and Sri Aurobindo godmen and hoaxes, and their contemporaries continue to do so. Would they say this to Mother Teresa or the Dalai Lama? No! Only Indian spiritual leaders are singled out.The India Today Conclave offered a basis for a discussion on spirituality, “Halo or Hoax?” Javed Akhtar joked, “In movies we create an illusion and then after three hours we put up a sign, The End, and make people step back into reality, whereas spiritual people also create an illusion but they do not put an end to it.” The audience applauded. I smiled within and thought, yes, what this man says is correct, all that is created comes to an end. If something does not end then it is not created! Perhaps he didn’t even realise the profound truth of what he was saying.So in some way he tacitly accepted that the love and drama he creates in the movies does end, but the love and transformation created by spiritual people never end. Yes, this whole world is an illusion that never ends. I drew Adi Shankara from his sarcasm. What an enigma: the perception and the reality. So Mr Akhtar is actually saying that his reel love songs are false. If only he knew the reality: that his lyrics express the genuine feelings of thousands of youth when they come and sing his marvelous songs before me, with that spark of love in their eyes. Real-life love never ends; it moves from life to lifetimes.Spirituality is intoxicating. Only those who step into it will know. Before criticising we need to do our homework. Has one visited ashrams, like the Ramakrishna Ashram, Ananda Mayi Ma Mutt, Brahma Kumaris’, Gayatri Parivar, Pandurang Shastri, Sri Aurobindo Ashram or Art of Living? Has one spent time with saints? Only then does one’s views carry weight, else they remain simple accusations only, a distorted perception, not reality.Mr Akhtar thundered again: “All modern-day spiritualists are hypocrites”. Many people froze as he dismissed the present-day gurus. Today there are millions of people who follow spirituality: are they all hypocrites? I appreciated that he could express his feelings boldly, without pretension. But the contempt that was exhibited for gurus was alarming. The hatred and frustration were obvious from his body language. It’s not just Mr Akhtar. Many journalists, communists, atheists and naxalites live in that state of mind, of being anti-religious, anti-rich, anti-famous, anti-business.Should I argue and put him down? No! I have never put anyone down. I can’t deviate from my nature. So I simply said, everyone has the right to be ignorant.A flash of Aurangzeb, who butchered thousands of gurus and would not listen to any reason or logic, came to mind. An intelligent man would look into all the avenues before he makes a comment or accusation. It is necessary to stand up for justice and expose the misdeeds of the world. Instead the so-called activists only engage in accusations. Blaming the entire modern-day spiritual guru and sadhu community is as foolish as branding the entire Muslim community as terrorists.It is the medieval brahmanical mindset to always put down business and politics and the colonial mindset to denounce gurus. As a result we never expanded our political influence nor globalised our business until very recently.Then came his next statement that Buddha went from the palace to the forest and today the gurus come from the forest to the palace. I said to myself, ‘Come on! Buddha went to the forest when he was unhappy and miserable, and he came right back when he became a guru’. Any high school student knows this. Besides, every palace had a rajguru. Last year hundreds of sadhus were evicted from the caves and hermitages of the Himalayan region, near Haridwar, by the forest department. People generally think sadhus should live in forests with torn clothes but the forest department wanted to send them to the city!The atheists have always fought with spiritual people. In those situations we should know how to act. It is pointless to argue with them. What do you say to a man who has never stepped into the realm of spirituality yet calls it a hoax? One cannot make a blind man see the light through his nose.Unfortunately atheists are just fearful and good dramatists. A man who equates arms, drugs and spirituality is not going to change his opinion immediately and anyway his opinion is not going to matter for what is and what will be. Come on, I thought, sing a new song. My compassion grew.

Often activists seem to create rage and revenge in the victims; they cannot bring solace and creative action. In the name of justice they fume with hatred. This can lead to acts of violence like the recent killings of 19 sadhus in Uttar Pradesh. It has been an old tradition to glorify the dead, and call the living a hoax. Kabir had to put up with this as did Meera, Buddha, Jesus, Adi Shankara and many more… the wise do not mind the outburst of a few.

And after all this, lessons were not learnt by this Jealous Lyricist. None other than some Stringers in the Bollywood circuit enjoyed his joke (Not even his wife, as seen in this video)

For once Sri Sri proved Javed Akhtar right that Sri Sri was wrong – Sri Sri had said  “Javed Akhtar is a great man ;)”

And why did I call him jealous? He simply cannot stand anyone else’s success and unfortunately he is not able to make it too. (He rode on Salim’s  ability to success and then Javed Akhtar back stabbed Salim (Don’t miss this story, since this has not been denied, it is a Fact – Click the link) So this slimy guy’s penchant for mischief is his trait

And this one takes the cake. He feels a strange kind of happiness on Pakistani Soil (Feb 12, 2011 report on The Nation) . But runs down India at slightest pretext

And when I bring to his notice with a link (not mine, a Newspaper piece), he responds kiddishly

There was an exchange some time back. This Astro-Pundit Javed Akhtar predicted something. And you know what happened to this

And then goes ahead to clarify with date. Inanity Personified!

It took just a question on the date for this Pen-Peddler (see a video later in this piece;) to get rattled. Look how he responds in defense 😉 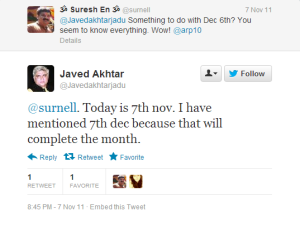 Pen-peddling by the great lyricist. LOL

8 thoughts on “Everyone has a right to be Ignorant – Mr. Javed Akhtar”