Skip to content
“We are not the Doers! If not you, someone else would have done”
Thus spake an elderly man to me, along with a long wound story to prove this point. All fine but No boss! This Gyan from Bhagavad Gita doesn’t work the way you projected. (Your logic works only when you have absolute power over the situation and position which itself is a myth, and when you want to deny someone the credit :-P) 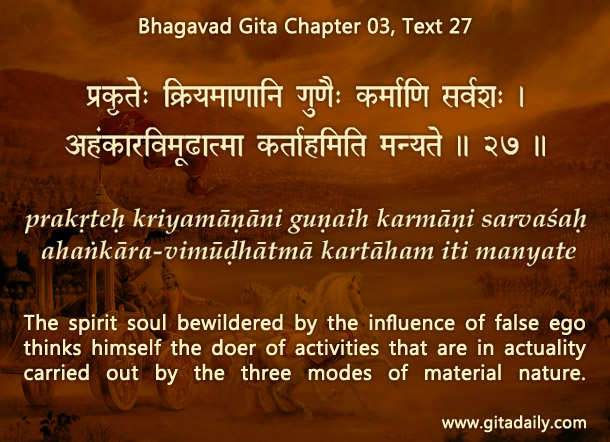 My understanding and flaws of such thinking in organizational context” If wrongly understood and applied, this Gyan has following pitfalls. Hence it is absolutely essential that we understand the knowledge well and then apply before we supply.
Improper understanding of “We are not the Doers” has the following perils:
These are the essential dangers of wrong application.
The essence of this in Bhagavad Gita is Vairagya (or dispassion). How and why it works in two specific circumstances. One, when we have done a good job and Two, when we have failed. In both the cases, Do’er ship has its pitfalls.
When we are successful and we feel a Doer ship, it ends up as Ego-booster which throws us off balance. Ego blinds us to facts and slowly results in arrogance which is detrimental. We get  feeling of indispensability  (and invincibility) which is not good situation to be in (in fact it is dangerous). Realizing that we are not the Doers in this case, sets the reality (there are lot of contributory factors, a single one failing would have not helped us get the successful result). It helps us to get out of the complacence and perpetual celebratory state and move on.

When we are not successful and we feel a Doer ship, it ends up in despondence. We condemn ourselves as worthless which again it lulls us into inaction. Our thinking would be that anything that unlucky me “Do”es goes wrong. Realizing we are not the Doers, we did the best would help us get out of the mire at the earliest and move on.
In both of the above situations, practicing Vairagya, dispassion (not indifference) helps us be alert and move on in life and not get bogged down by a “Success” or by a “Failure” We do our best and leave the result to the Divine.

In organization context and as leaders, we should also realize – Not anyone can “Do” it. It requires skill and tact. We are not the Doers… But someone has to Do it… And Doing it require Skill… and Commitment
Looking back and considering what is happening today – I am laughing my bottoms off.

Starting with an excerpt from “About” section of this site.  Easier said than done! Basic premise is that no one is bad, only their acts are.

Love or hate what I write or do, please don’t love or hate me. In short, love/hate Sureshisms and not Suresh.

I “have tried to“ imbibe this philosophy in my career of nearly 29 years, of which it was Team Lead or above after the first 4 years which has saved me a lot of blushes, retain exceptional talent and also get along with people better or atleast as much as any of my colleagues could. A subordinate making a blunder is never damned (or allowed to be damned by his peers or superiors) whatever the cost and (s)he was defended & protected to the core (Unless it was an act against principles of ethics and integrity). It is not very difficult. List down whatever good this employee has contributed and you have an answer, why “a” blunder however costly it may seem, should not be the reason to dump the person into the cellar.

“Any fool can criticize, complain, and condemn—and most fools do. But it takes character and self-control to be understanding and forgiving.”
― Dale Carnegie

Just look around, everyone seem to be fed on staple diet of Condemnation, which is being relished too and you see only bad (Work, Politics, Religion, Media). What does it change? Zilch! Whereas compassion and understanding, a tinge of positivity goes miles to change things and transforms the unchangeable.

My eternal favourite Sloka on Leadership from Bhagavad Gita 3:21

Whatever action is performed by a great man, common men follow in his footsteps. And whatever standards he sets by exemplary acts, all the world pursues.

Take away: A leader who does not lead by example is not a leader at all. Not about preaching, it is about doing. What you do, is emulated – not what you talk

And another thing I picked up along the journey is Leadership is not about Power, it is about Empowerment. Else you remain a Manager or the dreaded 4-lettered word “BOSS” 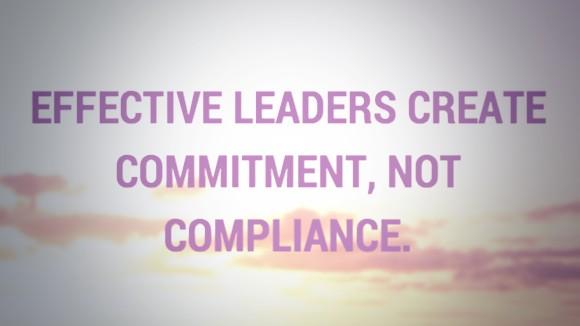 Signing off with a quote about the fakes, I love (Author Unknown)

“Whenever they are condemning weaves or breast implants, some people speak so passionately that their false teeth almost fall out.”

Thus says Bhagavad Gita in the Chapter 2 (Karma Yoga). It broadly translates to “You have the right to work only but never to its fruits. Let not the fruits of action be your motive, nor let your attachment be to inaction” As in any of our scriptural texts, the purport goes far beyond the literal translation.
Most of us work for a material result and it is this result that motivates us to work. For instance, if every student study for the sake of marks, they become obsessive and selective in their study. The knowledge or learning thus becomes a lop-sided, short-lived gain. They lose out on long term gains like insight into and understanding of the subject. In fact healthy study habit itself is a casualty. By healthy study habit, I mean that which signify the ability to learn and apply.  What this in effect does is to constrain oneself into boxing their belief that all events in life is defined in terms of Success or Failure, which defeats the larger purpose of life.
Another example: Consider a teacher working in a school, with her Principal watching over her shoulders. More often than not they end up demonstrating their sincerity and diligence to the Principal and not focused on helping the students learn. As the world often does, Principal becomes pleased and will rate them high even if the teacher is not successful in their primary duty of facilitating learning.

As Henry Ford said, “Measure of Quality is what we do when no one is watching” Unfortunately, many work for the approval of the world and not for our own approval
Another purport, though the verse above says, that there should be no attachment to inaction too. Wrong action many times results in disaster. Some time we need to take a call on detaching from work itself. We become obsessed with our own creations at work. Even when we know we had gone wrong, we persist for a bit more to make it a success, many a times knowing well that it wouldn’t work.

Take the case of this well digger.  He continues to dig a well deeper and deeper just because he started it, knowing well after a while that it is not going to yield any water. This despite experts with technologically advanced Water table Prospecting tools, sounding out to dig one well at a particular spot. Ego did not permit him to abandon and move towards that spot.

It is not too difficult to find such well diggers at work. Lack of an objective feedback system insulate many from determining the pitfalls of a designed intervention. In such cases, detachment from work and looking at it objectively would help us realize the futility of our effort, retrace the steps and pursue more effective path.
In reply to a question “As a person taking up an assignment at the corporate level, how can I be effective as a leader” during one of the Satsangs in the Art of Living Ashram many many years ago, Gurudev Sri Sri Ravi Shankar:

Improve your communication skills. This involves a great deal of listening and detachment from the situation (rising above the situation). This is much needed for anyone in corporate as your grown. A good Manager cannot afford to be impulsive, short tempered, incommunicable, unfriendly and lacking in confidence. In the presence of these things one will not be able to do business properly.
Remember one thing, the manager of the Universe is not so obvious. The one who manages this universe does not make it so obvious that he is doing it; or that He is in control.
Similarly, manage from behind. Leading from behind is the best. When you want to lead a project you should not emphasize your leadership too much. You should do it from behind.
There is a saying in Sanskrit, Paroksha Priyahi Vai Devaha, which means that the Gods like to do things indirectly and not so obviously.  A person feels, ‘I am doing it’, but it is the Gods who make them do it. So they give the people the joy of feeling that they are doing it, but in reality, it is the Divine energy that does it in a subtle manner, which is not so obvious.

By the way, it was “Yours Truly” who posed the question and received the answer.
Good Leadership should be like the string in a garland – invisible to the outside world, but in its absence, the flowers fall apart
Further read:
http://www.lifehack.org/articles/work/20-signs-that-youve-got-good-boss.html