Compilation of  articles for Navaratri for your quick reference.

Day 1 of Navaratri – Shailaputri
One of all nine forms of Devi Durga is worshipped every day in Navaratri. The first form of Maa Durga is Shailaputri, who was born to the King of Mountains. “Shaila” means mountain and “putri” means daughter. Hence, she is called Shailaputri – the daughter of mountain. Maa Shailaputri, an absolute form of Mother Nature, is worshipped on the first day of Navratri. She is also referred to as Goddess Parvati, the consort of Lord Shiva and mother of Lord Ganesha and Kartikeya. The image of Maa Shailaputri is a divine lady, holding a trishul in her right hand and lotus flower in her left hand. She rides on Nandi, a bull. 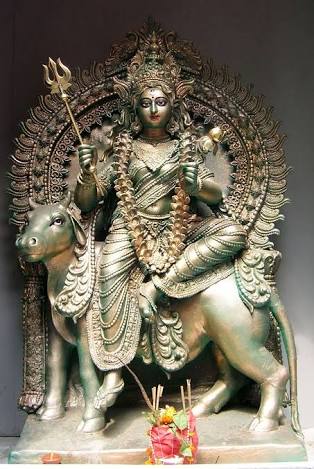 Maa Shailaputri is the goddess of the muladhara chakra or root/basal chakra, and upon awakening this Shakti one begins their journey to spiritual awakening and to their purpose in life. Without energising the muladhara chakra one doesn’t have the power and strength to do anything worthwhile. It is said that one should worship Maa Shailaputri to make full use of the precious human life. Therefore, this Avtar of Goddess Durga is worshipped on the first day of Navratri.

Day 2 of Navaratri – Brahmacharini
On the second day of Navaratri, Maa Brahmacharini – a manifestation of Maa Durga – is worshipped. The form of Goddess Brahmacharini is extremely radiant and majestic. Maa signifies love and loyalty, wisdom and knowledge. She holds a rosary in her hight hand and a Kamandal in her left hand. She wears Rudraksha. The word “Brahm” refers to Tapa (penance) – Her name means “one who performs Tapa (penance)”. 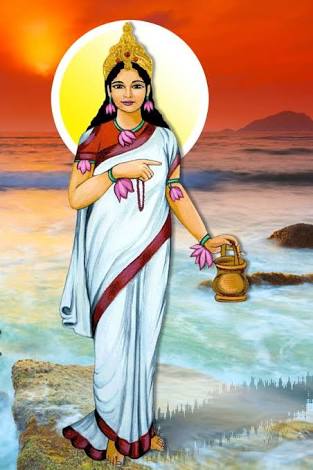 Goddess Brahmcharini blesses you with great emotional strength and you may be able to keep your mental balance and confidence even in the darkest hour. She inspires you to hold on to your ethics and march on the path of duty. By the grace of Maa Brahmacharini, you strive to move forward in life without getting disheartened by the numerous challenges coming your way. Her blessings help you get rid of selfishness, ego, greed and laziness. Maa Brahmacharini governs the Swadhisthana Chakra and upon awakening of the same the mind of the seeker moving upward, establishes in this Chakra. This chakra helps in maintaining the devotion and dedication in a steady manner.

Maa Chandraghanta is the third manifestation of Devi Durga and is worshipped on the 3rd day of Navratri. Since she has a Chandra or half moon, in the shape of a Ghanta (bell) on her forehead, she is addressed as Chandraghanta. A symbol of peace, serenity and prosperity, Maa Chandraghanta has three eyes and ten hands holding ten types of swords, weapons and arrows. She establishes justice and gives Her devotees the courage and strength to overcome challenges. 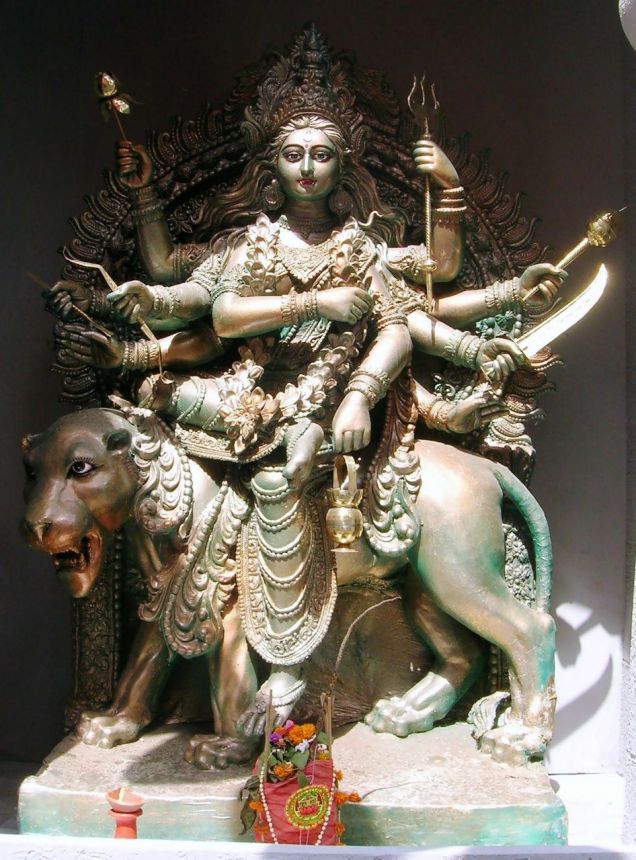 Her appearance is a source of power which is always busy killing and suppressing the bad and wicked. However, for her devotees, Maa is serene, gentle and peaceful. By worshipping Maa Chrandraghanta, you will open the doors to great respect, fame and glory. Maa also helps you attain spiritual enlightenment. Her idol, which symbolises both beauty and bravery, gives you the strength the keep the negative energy away and repels all the troubles from your life.

You need to follow simple rituals to worship Goddess Chandraghanta. You should first worship all the Gods, Goddesses and Planets in the Kalash and then offer prayer to Lord Ganesha and Kartikeya and Goddess Saraswati, Lakshmi, Vijaya, Jaya – the family members of Goddess Durga. The pooja should be concluded by worshipping Goddess Chandraghanta followed by a heartfelt prayer to Lord Shiva and Lord Brahma. Maa Chandrghanta governs the Manipuraka Chakra that embodies the change from simplicity to complexity

Maa Kushmanda, the fourth form of Goddess Durga, is worshipped on the 4th day of Navratri. Her name means ‘the cosmic egg’ and she is considered the creator of the universe. As per the Hindu mythology, Lord Vishnu was able to start creating the universe when Maa Kushmanda smiled like a flower which blossomed with a bud. She created the world from nothing, at the time when there was eternal darkness all around. This Swarupa of Maa Durga is the source of all. Since she created the universe, she is called Adiswarupini and Adishakti. 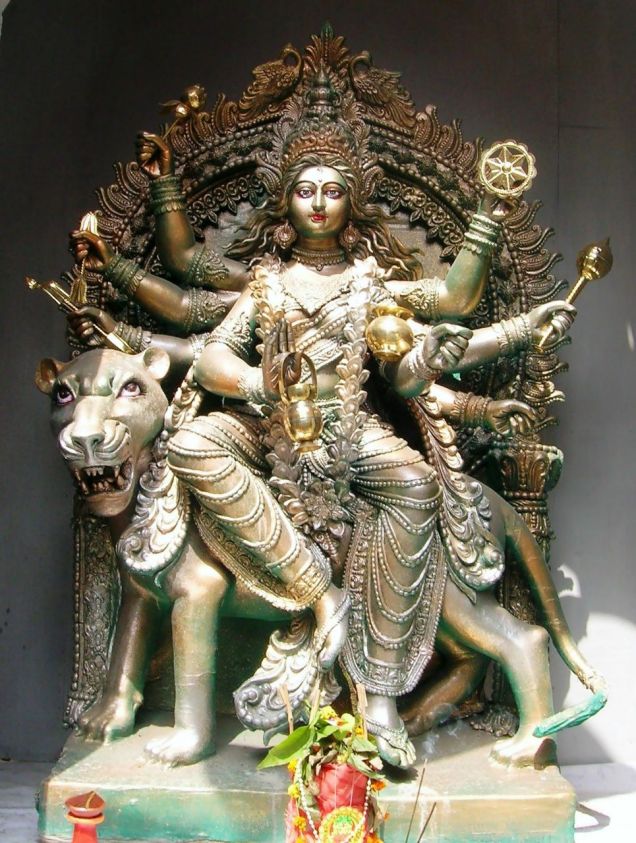 She has eights hands in which she holds Kamandalu, bow, arrow, a jar of nectar (Amrita), discus, mace and a lotus, and in one hand she holds a rosary which blesses her devotees with the Ashtasiddhis and Navnidhis. She is also known as Ashtabhuja. She has a radiant face and golden body complexion. Maa resides in the core of the Sun and thus controls the Surya Loka.

Maa Kushmanda represents Anahata Chakra in spiritual practice. The divine blessings of Maa Kushmanda helps you improve your health and wealth. She removes all the hurdles and troubles from your life and enables you to get rid of all sorts sorrows in life. Maa brings light into darkness and establishes harmony in your life.

Day 5 of Navaratri – Skandamata
The 5th day of Navratri is dedicated to Goddess Skandamata, the 5th manifestation of Goddess Durga and the mother of Lord Kartikeya, who was chosen by the devatas as their commander in chief in the war against the demons. The image of Devi Skandamata portrays Her holding Lord Skanda in his infant form and a lotus in her right hand. She has four arms, three eyes and a bright complexion. She is also called as Padamasani since She is often depicted seated on a lotus flower. She is also worshiped in the form of Parvati, Maheshwari or Mata Gauri. The left arm of the goddess is in a pose to grant boon to her devotees. 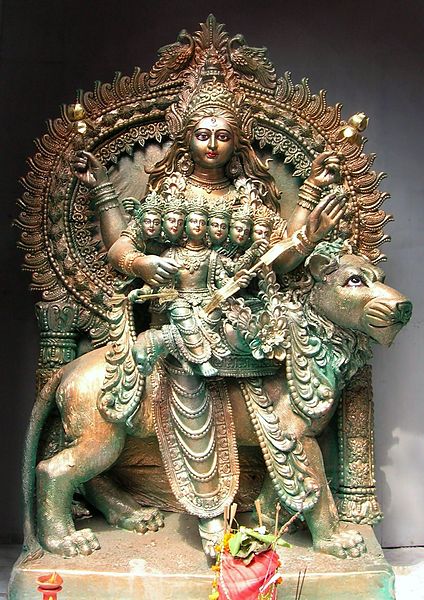 The legend says that Tarakasur, a great demon, once pleased Lord Brahma with his great devotion and extremely tough penance. He asked Lord Brahma to shower His blessings and make him immortal. Lord Brahma denied him this blessing, saying none can escape death. Tarkasur acted smart and asked for the death by the son of Lord Shiva, since he thought Lord Shiva would never get married. Tarakasur started tormenting the people on the earth. Fearing his strength would cause destructions, the devatas requested Lord Shiva to get married. He agreed and married Goddess Parvati. Their child, Lord Kartikeya/Skanda Kumara, demolished Tarkasur. Devi Skandmata is a symbol of the mother-son relationship.

By worshipping Her, you get immense love and affection from her and get all his desires fulfilled. You may attain supreme joy even in this very mortal world. Her worship automatically includes the worship of Lord Kartikeya (in his child form). Maa Skandamaata resides in the Vishuddhi Chakra,  symbolizing the aspects of creativity and communications.

The 6th day of Navaratri festival is dedicated to Maa Katyayani, the 6th form of Goddess Durga. Once there was a great sage named Katya and it was his wish that Maa Durga be born his daughter. He practiced austere penance for several years to please the Gods. In the meanwhile, the trinity of Gods – Brahma, Vishnu and Shiva – got enraged by atrocoties committed by Mahishasura (Buffalo Demon) who had a boon that he cannot be slayed by any man/male, confident that his strength can never be surpassed by a Female. Trinity of Gods thus bestowed all their energies and created this form of Goddess Durga, who thus had the powers of the Trinity to slay Mahishasura. Since she was born to Katya, she was called Katyayani. 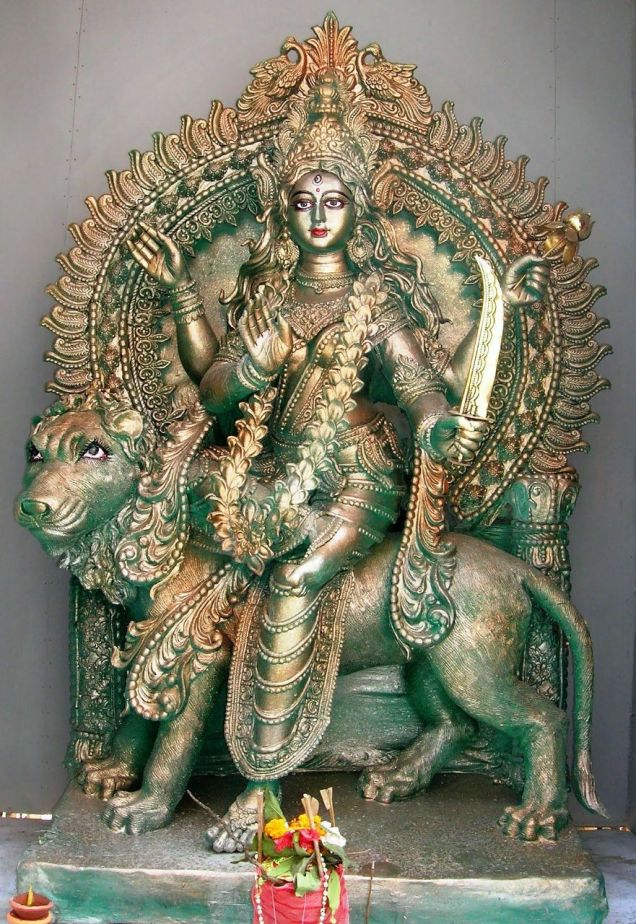 Maa Katyayani has 3 eyes and 4 hands. She holds a sword in Her one left-hand and a lotus in another. The other 2 hands respectively show protecting and allowing actions. If you make vow of fasting and worshipping her, she would bless you with the husband you have wished and prayed for. If a lady’s marriage is getting delayed due to one or the other reason, she may worship Maa Katyayani to remove obstacles that may be causing delays in her marriage.

Maa also blesses you with better health and wealth. By worshipping Maa Katyayani, you may develop great strength to fight all disease, sorrows and fears. In order to destruct the sins accumulated over your several lives, you should religiously worship Maa Katyayani.  Maa Katyayani is ascribed to the sixth Agnya chakra or the ‘Third Eye Chakra.’

The 7th day of Navaratri is dedicated to Maa Kaalratri, the 7th form of Maa Durga. Here, Kaala means time and ratri means death and Kaalratri means the One who is the Death of Kaal. Maa Kaalratri destroys ignorance and brings light into the darkness. This form also depicts the dark side – the super power that creates havoc and removes all things bad and dirty. But to Her devotees, She brings calmness and courage. 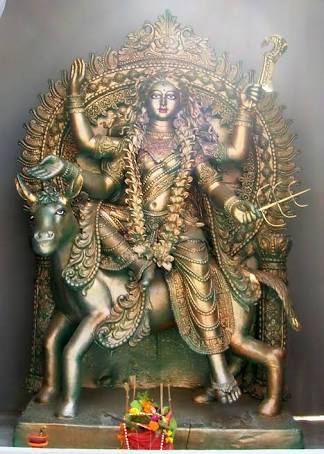 Maa Kaalratri has dark complexion. Donkey is Her mount, She has bountiful hair and four hands. One of the two left hands holds a cleaver and the other holds a torch, and the right two hands are in “giving” and “protecting” mudras. She has three eyes that emanate rays like lightning and Her necklace is shining like thunder. When She inhales and exhales air, flames appear through Her nostrils. Ganesha advises you to wear Blue, Red and White colour on this day.

Maa teaches us that sorrow, pain, decay, destruction and death are unavoidable and cannot be ignored. These are the truths of life and denying them is futile. We must accept their presence and significance to realise the fullness of our being and our potential. Maa Kaalratri governs the Crown Chakra or Sahasraara and provides the Siddhi to the seeker

The 8th day of Navaratri is dedicated to Maa Mahagauri, the 8th form of Maa Durga. The legend has it that Maa Mahagauri liberated the world from evil forces. She has three eyes and four hands. Her lower right hand holds a trishul and the upper right hand is in the mudra of allaying fear. Whereas her lower left hand is in a pose of granting boons to Her devotees and she is holding a damaru in Her upper left hand. 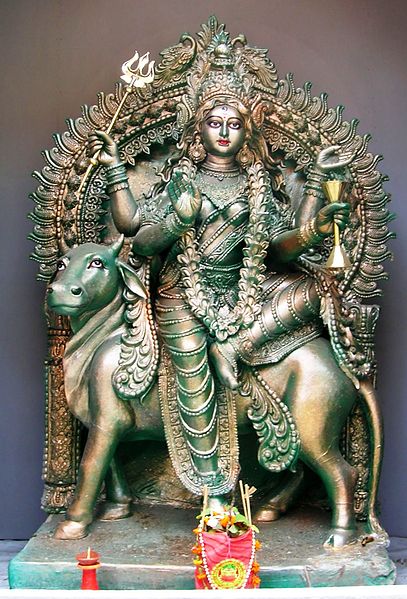 She has extremely fair complexion and therefore Maa is compared with the conch, the moon and the white flower of Kunda. Radiant and compassionate, Maa Maugauri is usually depicted in a white or green saari and riding a bull. She is also known as Shwetambardhara. Maa Mahagauri purifies the souls of Her devotees and removes all their sins. She has a calming effect on the lives of Her devotees and she also helps them improve their knowledge.

Worship Maa Mahagauri to be free from the clutches of the material world and to remove sorrows from your life, for She will lead you to the path of virtue and inner power.

The last among the nine forms of Maa Durga, Maa Siddhidatri, is worshipped on the 9th day of Navaratri. Maa Siddhidatri grants Her devotees all sorts of achievements and is capable of giving all sorts of occult powers. She is the possessor of 26 different wishes (Siddhis) which She grants Her worshipers. The legend has it that the Lord Shiva got all those Siddhis by worshipping Maa Shakti. With Her grace the half body of Lord Shiva became that of Maa Shakti, and therefore he was called as Ardhanareeshvara. 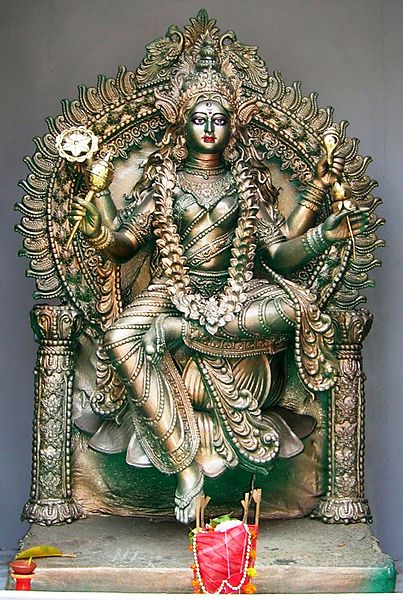 This Avtar of Maa Durga removes ignorance and provides knowledge to Her devotees. She is also worshipped by Deva, Gandharva, Asura, Yaksha and Siddha. Maa sits on Kamal (Lotus) and rides on the lion. She has four hands and holds a Gada in the lower right hand, a Chakra in the upper right hand, a lotus flower in the lower left hand and a Shankha in the upper left hand.

Her glory and power are infinite and worshipping Maa Siddhidatri on the final day (the ninth day) of Navaratri bestows all Siddhis to Her devotees and also marks the successful completion of the Navaratri festival.