Leela Samson, the Censor Board Chief (as with her usual condescending ways) calls most members of the board uneducated and an embarrassment. When legal notice was issued by 2 of the members, she was forced to apologize and play with words saying she meant “Cinema Illiterate” – What is her literacy on Cinema anyway? 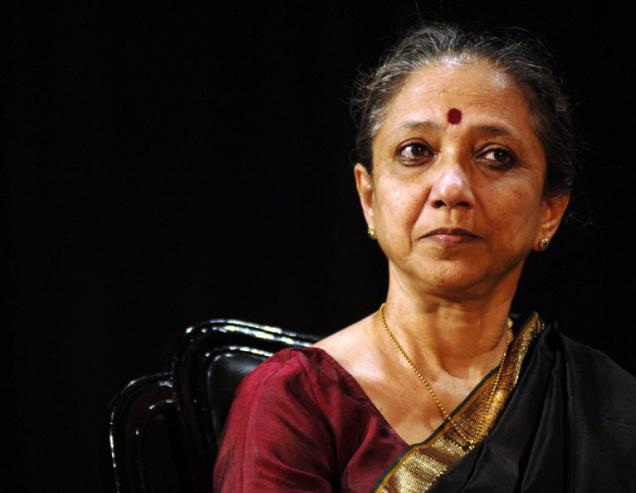 Reminds me of her days in Kalakshetra, Chennai where she was far more vicious and yet could get away due to the backing of the Powers-that-be. She changed the logo of years (since 1936) because it had Lord Nartana Ganesha with Lord Shiva‘s Emblem.

Citing superstition, she ordered stopping worship of all Lord Ganesh images in the campus for which traditionally puja was offered. But students at considerable risk to their own career with the help of some Hindu Cultural Organizations did not get cowed down and protested strongly. She had ordered removal of  Lord Ganesh Idols  but had to restore the one in front of theater due to protest.

Height was when she refused permission and threatened expulsion of students from participating in inaugural dance piece in the Health and Happiness Program Organized by His Holiness Pujya Gurudev Sri Sri Ravi Shankar ‘s The Art of Living in Chennai between Dec 5th to 8th 2006. As with done earlier in different states in the Silver Jublilee year of the Art of living (Mohiniyattam in Kochi, Odissi in Bhubhaneshwar and so on), it was decided to host  a performance of 500 dancers (one of whom happened to be my Daughter 🙂 showcasing Bharatnatyam as TN’s contribution to dance. She opposed participation of Kalakshetra students giving a ridiculous  Reason: It is a “Hindu Event”. She had no qualms to revel in the glory that this Hindu Dance form brought her. Unfortunately for her, the Student-Artistes ignored her threat, came and participated in the event, reminding her that Art is bigger than the Artist. She then continued harassing the Faculty who participated and coordinated in the event, till Karma caught up with her in the form of a CAG report.

CAG report severly indicted her ways of functioning – Principal Accountant General (Civil Audit) of Tamil Nadu and Puducherry raised objections to the awarding and upgrade of civil works, procuring of unused sound systems worth Rs.62 lakh and consulting an architect (and not a competent third person) to analyse tenders for the Koothambalam auditorium’s renovation.

All the renovations and spending meant Kalakshetra took Rs.8 crore from the consolidated fund.Apart from renovation processes, the report showed irregularities in 16 appointments at the institution.

That is Leela Samson the renowned artist for you. Someone who faked her qualification to become Director of Kalakshetra, but thanks to her GodMother in Delhi, every rule in the book was bent to make it happen.  Legendary Rukmini Devi Arundale will not be too pleased at her protege’s exploits

PS: A cursory Googling of “Leela Samson Controversy” would throw up results predominantly of “The Hindu” (not surprising, foretelling the things to come) and most of them drumming up support for her