Karnataka is popularly known as a land of art forms and of grand temples. Every place, every village has its own uniqueness and greatness. Some places have historical significance and are epitomesJ of permanent evidences for pre-historic events and anecdotes. One such place is Gadidam of Bagepalli Taluk in Chikkaballapura District (around 100 km north from Bengaluru city on Bengaluru-Hyderabad Highway)

There are references in the records that Gadidam Sri Venkataramana Swamy temple was built by Emperor Janamejaya who rule Bharata Khanda (Indian Sub-Continent) in the beginning Kali Yuga. Janamejaya is son of Pariskhit. Pariskhit is son of Abhimanyu, son of Arjuna. This proves the antiquity of this amazing temple.

Maharshi Shirgu’s son, Shrungi sees this and says, “You appear to be of a royal descent. What harm did my father to warrant putting a dead snake around his neck. I curse you that you will die of a poisonous snake bite within 7 days”.  Curse of realised Sages being powerful, Parikshit dies of snake bite immediately thereafter. Janamejaya who comes to know of this curse on his father, becomes livid over snakes and vows to seek revenge by wiping out the entire snake family from the earth. He begins the Sarpanasha Yagna (sacrificial fire installed and invoked to destroy serpents). Serpent kings like Lord Vishnu’s Adishesha, Lord Shiva’s Nagaraja and Elakruta,devotee of Lord Krishna seeks help of Gods. In the meanwhile, cores of snakes were getting consumed by Janamejaya’s sacrificial fire. A serpent king, Takshaka had sought refuge in Lord Indra. During when the chant Sarpayaga, “Sahendraya Takshakaya, Indraya Indra sameta Takshakaya swaha” was made, Takshaka along with Indra were also to be consumed by the fire. In order to protect himself, Lord Indra abandons Takshaka to save himself. Sage Astika then assumes form of a Brahmin boy scholar and seeks protection of Janamejaya, who offers to fulfil any of his wish. Astika then seeks to end the Sarpanasha Yagna right away, forgive the Nagas (Serpents)  and let them survive, thereby briging the Yagna to an end and any further destruction of the serpent race.

However, killing of so many serpents was sinful and as a Karmic retribution of Sarpa nasha (destruction of serpents) Janamejaya begins to suffers from Leukoderma/Vitilligo (Pandu Roga). Janamajeya seeks remedy for this from learned sages. Adishesha, on whom Lord Vishu rests, then advises that Janamejaya as a remedy to his ailment should build 101 Temples of manifestations (avataras) of Lord Vishnu. One of the 101 temples built and the one in the Dandakaranya is Gadidam Sri Venkataramana Swamy Temple.

Gadidam – Legend behind the name

As the story goes in Mahabharatas Shakuni schemed with Duryodhana to destroy Pandavas along with Kunti, by building House of Wax/lacquer (Lakshagriha) and setting it on fire when they were asleep. Pandavas were forewarned by Vidhura before Pandavas set out on the journey after Kauravas invited their cousins to visit a fair held there and also to live in the house for some time. Vidura tactfully, in the presence of the Kauravas, warned the Pandavas about the imminent danger in coded language:

Vidura also had a miner assisting Pandavas to create a secret underground tunner with its one mouth in the centre of the palace-house and the other mouth close to  Hill of Hidambhasura in Dandakaranya, which lies in the northern direction of the present Sri Venkataraman Swamy Temple. Pandavas lived for a full year in the house while the tunnel was being dug in secrecy and was completed in less than 6 months. The lakshagraha was to be burnt on an Amavasya night and when it was done, Pandavas escaped through the tunnel and emerged at the Hidambhasura Hills. While they were resting after the escape, Bhima stood guard for them while others fell fast asleep. Hidambasura who lived on the hills senses presence of Humans and orders his beautiful sister Hidambi to seek the humans, kill them and bring the flesh to him. Hidambi sees Bhima and was besotted to him. She forgot her brother’s orders and stood there forgetting herself and the time admiring Bhima. Hidambhasura worried about his sister not returning for a long time comes in search of her and finds well bodied Bhima there. He wanted to devour him but Hidami stops him and expresses her intention to marry Bhima. She pleads with him not to kill and consume Bhima which fell on deaf ears. Finally Bhima and Hidambhasura fights each other, at the end of which Bhima kills Hidambhasura. Roar during this fight wakes up Kunti and other Pandavas who see the gory sight. They also get Bhima married to Hidambi, to whom Ghatotkacha  was born in this place. Thus came the name Gadidam (gradual morphing from Ghatotkacha). On the southern side of Gadidam hill the Sanctum Sanctorum of the Temple for Lord Venkataramana was built by Janamejaya.

Speciality of the Deity’s Murti

On the stone ornamental arch surrounding the Moola Murti (Main installed Idol), there are carvings of Lord Vishnu’s Dashavataras (10 manifestations). Sudharshana Chakra towards the head region of Moola Murti. Like in the rear of the ornamental arch, it is replicated in the front and the form of Lord Venkataramana Swamy is carved. This is the speciality of this pratishta.

Post Mahabharata period, this temple fell into disuse and the Murti got covered by anthill and it remained so for thousands of years. During the reign of Cholas, the king remained childless for a long time. They undertook penance, performed many worships and finally begot two daughters. Both were extremely beautiful, talented, intelligent and possessed all positive virtues. However both had Kantaka Dosha (Ill effects of Saturn transitions) in their horoscope. Their marriage was getting delayed which worried the King a lot. One night, Lord Venkataramana Swamy of Gadidam appears in the King’s dream and instructs the king thus – “On the banks of river Chitravati, besides the ridge of Gadidam Hills, there is a temple dedicated to Me. It has only me installed and worshipped. As a remedy for the worries, as a remedy for the Kantaka Dosha of your daughters, you have to install & consecrate the murtis of Sri Bhooneela and Sri Lakshmi besides me. It has to be done on Vishaka Nakshatra (star) on the Full moon Day, in the Vaishaka and conduct a Bramha Rathotsava (Chariot festival). The King thus sets out to renovate and restore the temple, does as instructed by the Lord in his dreams. He also organises a grand Chariot festival which is one of the biggest events of this temple even to this date.

In the 14th Century, Harihara and Bukka of Vijayanagar Empire, unable to bear the torture of the enemy King Turushkula of the neighbouring Kingdom in present day Maharashtra move towards Hampi in Hospet Taluk of Bellary’s District. They see Sage Vidyaranya Swamy in deep meditation and penance on the banks of river Tunga Bhadra in Anegundi village. They prostrate before the learned Saint who then briefs them about the speciality of the place. Under the guidance and with grace of Sage Vidyaranya they build a beautify new town and calls it Hampi Vijayanagara. With the guidance of Vidyaranya they begin ruling the Vijayanagara kingdom. During their tour of the Kingdom, they worshipped in Lepakshi, Penukonda temples and arrive at Sri Bhooneeladevi and Sri Lakshmi Venkataramana Swamy temple in Gadidam.

They found that the temple was too small and they construct a huge courtyard/atrium (prangana), establish 4 Dwaras (Entry/Exits), Dwaja stambha (Flag Mast) and the Gopuras (Towers). This fact has been established by the epigraphs in the precincts.

Near the Southern Dwara there is an ancient Banyan Tree that has serpent shaped roots which is fascinating sight and is a possible indication of the History of this temple. 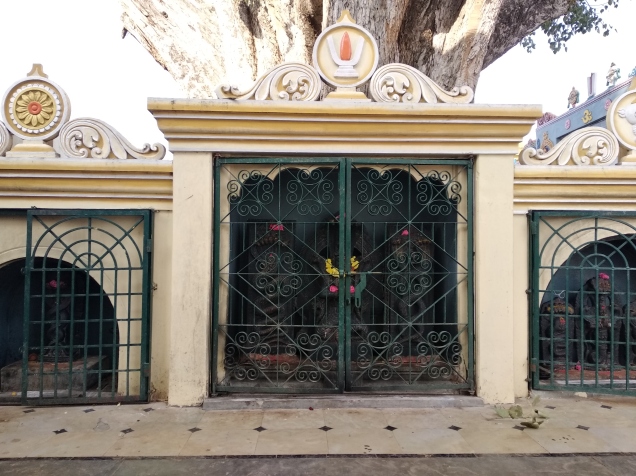 On the street leading to Western dwara Vinta’s son Jarutanta stands in obeisance with folded hands in Namaskara praying to the Deity.

The Eastern Dwarna or Entrance is newly built and the Gopura is 108 Feet tall. There are intricate carvings on this and it is a sight to behold. In front of this door is a gigantic statute of almost life like Lord Hanuman facing towards the Main Deity 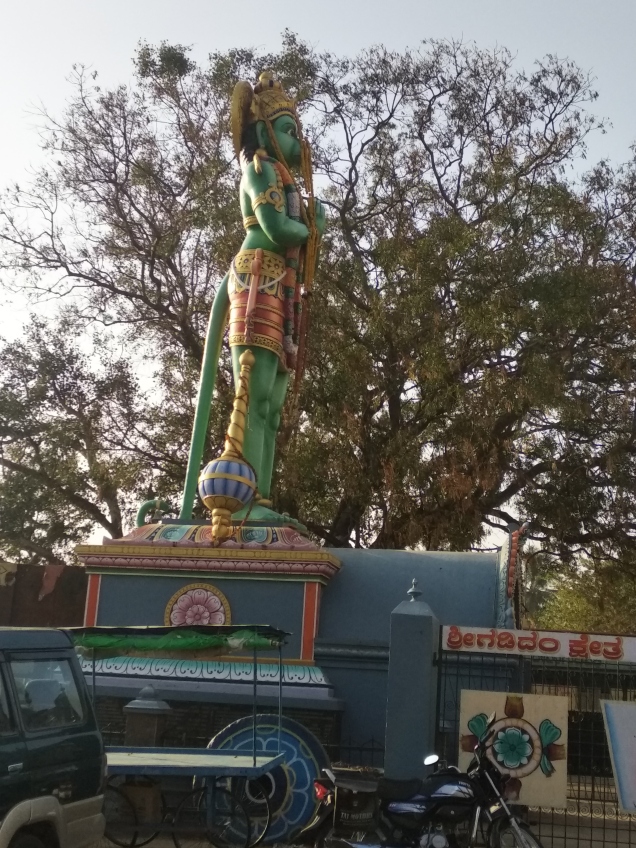 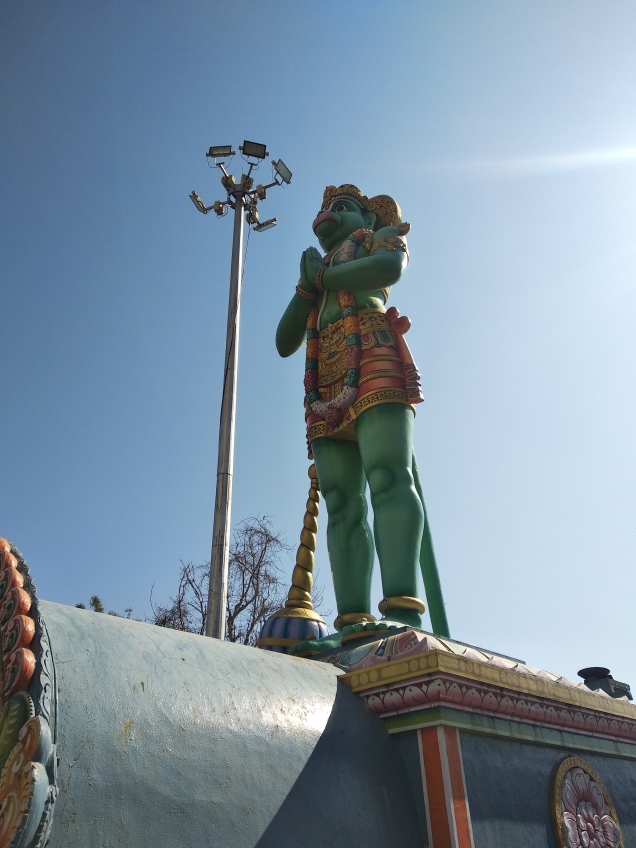 The huge temple complex also houses the murits of Saptamatrikas.

Gadidam Temple, known as the second Tirumala (Tirupati) is known for its remedy for those having Sarpa Dosha, Obstacles in getting married.

A new Dwaja Stambha was being made and work was in progress. Expected to be completed and installed by the Bramhotsava time

Ways to Reach
The nearest town to the temple is Bagepalli. It is around 3 km away.

By Air
Bengaluru Devanahalli Airport is around 50 kms away