When in my life did I ever feel so cynical or despondent as today? I am sure many of us have asked and resigned into accepting this as a necessary evil and aspect of our life.

When appeasement is a norm especially when it comes to Minority communities (Read Muslims) – Yes, surprisingly the other communities including Linguistic grouping never vote en bloc like how Muslims in India do – Even a proven brutal and horrific rape accused is being protected, citing Laws just because he answers to a Secular Name. And more juvenile was our Home Minister’s statement on Steps for Rape Prevention – Framed it immortalize it for the Stupidity Value. Do the Government seem serious in addressing a serious issue of Rapes (Delhi still maintains Position as Rape Capital, way above the next worst city and Not surprised with this retrogrades as decision maker)

A war widow and martyr’s mother fasts not for any favors but just to get back the martyr’s head that is so used to be held high but today dismembered and taken by Pakistan army as a trophy. They wanted it back to complete the final rites and the Authorities seem to be making no efforts toward that end, but forcing the family to call off their protest (I won’t be surprised some threats about withholding pensions etc. ) A wimpy response is what our Government decides to dish out to the perpetrators of this inhuman war crime. Adamance that the Visa regime would stay, send out trucks with perishables which was brazenly stopped at the LOC (not Lost out Control) yet this Goverment Crawls on its knees pleading with these Rogue State but did not hesitate to train their Water guns or Lathis (and boots) on innocent and peaceful protestors 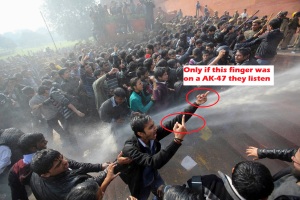 And this is how Owaissi was received – with complete security resembling a Victory Procession:

What now? Do I let despondency take over me and stun me into inaction? Do I let  Doubt  feed on doubt or counter it and let it die. Despondency degenerates into cynicism, faultfinding, doom, gloom, pessimism or do we make emphasize on hopes and attract it to our lives.  Negativity nudges us towards despondency and inaction.

No! it is time for action. We cannot let the destiny of our Nation (and the world) drift. Time to take charge and make things happen by design. Strength is in Numbers – Sanghe Shakti Kaliyuge – Said some learned Saint of Bharath in the past. It is applicable more than ever before.

Here is a reply from His Holiness Pujya Gurudev Sri Sri Ravi Shankar of The Art of Living in response to a question:

Q: If one faces failure in some task again and again, should I continue to do the same, or should I drop that?
Sri Sri : There is one proverb in India, “Task gets accomplished with the Sattva, and not with the material”. So, in order to get something done, sattogun should rise. And what does one do to increase Sattogun? With right food, right conduct, and relaxing your mind for some time – This is first. Secondly, even if you face failure in spite of that, sattogun doesn’t let your enthusiasm to shatter, and when that driving force is still there, you don’t even think of dropping. Like if gambler wins once, he develops that taste to win. And then he continues to play again and again with the wish to win, and even when some failure is encountered, he doesn’t even think of dropping in between. Even during some failure, that strong conviction of achieving some good is there, and this conviction will be there when you have that dedication for the task. Like, with enthusiasm in action and peace in heart, people kept fighting for freedom for two centuries.
The ones who were fighting for freedom, they didn’t get any money, they didn’t steal anything, but did they leave the drive?

And third factor, look for the reason of failure. Every failure is a step towards success. One reason can be some weakness in oneself or some weak point in the system, arrangements. Self weakness – like someone is not able to present the work properly. E.g. if you go for interview, and say some words here and there, then interviewer develops a doubt if you would be able to do that or not. So, one doesn’t get job because of one’s weakness. To get rid of one’s weakness, enhance your abilities.

Each failure is a step towards success, so analyze what did you learn out of this? Did you flow with the emotions? You didn’t consult those who are already into that profession? You didn’t trust them, or you didn’t keep faithful people with you. All these reasons could be there. So, to get rid of any weakness, enhance your ability, and go into the depth of knowledge of the field in which you wish to move ahead.

Second is to amend the system or arrangements. Now, this is not in hands of a single person. Like if corruption is to be checked, can you fight alone? Be with the group. Awaken that intelligence in people for that. Get people to move ahead with you. “Sanghe Shakti Kaliyuge”

In Kalyuga, the power is in the team. People say that it is the peak of Kalyuga, and it is as if truth has taken a backseat. If you feel like that, then work in a team. Take some people along and then see if the task gets accomplished or not. To enhance capability, you would have to do something yourself, go within yourself. Be in the world to get more people along, and be with yourself to gain abilities. Taking along both the fields, you will definitely get success in your tasks. If you have given all your trials, put in your 100 percent and if, even then, you didn’t get success, then it is OK. Take some other work in your hands. But don’t run away if you face failure for the first or second time.

Volunteer For A Better India (VFABI). This is a Citizens’ Action Plan – each one of us can make a difference. A large number of partners including the United Nations are supporting this. Visit www.vfabi.org

Just an hour of ours invested in making a difference would do – raises us too. Conquer Despondency and Inertia! Lord Krishna’s advise to Arjuna in the very chapter is more relevant today 🙂