It was extremely disappointing how a movement that caught imagination of the world, and more specifically amongst the youth of India, was reduced to Shambles just to satisfy the ego of a couple of members in Team Anna. What really prompted the abject and meek surrender, all of a sudden – mobilizing signatures of 23 “Eminent” citizens.

FINALLY MOVEMENT ENDED WITH THIS 23 SIGNATURES

REST OF SUPPORTERS BE  DAMNED!!!

When did a movement that was propped up and maintained by millions of “not-so-eminent” citizenry suddenly get driven by just 23 “Eminent” persons’ opinion. I do not care for the already loud noises being made of the electoral prospects of these motley crowd – the real and ONLY loser is WE, “not-so-eminent”, Citizens of India, who gave heart and soul to support this movement. I am only concerned about how easily the basic agenda was dispensed. With not so much of a care for common folks,such a huge step does seem to make a mockery of the very ideals that they preached.

Pretty obvious that Arvind Kejriwal and others of Team Anna chickened out and FEARED for their lives, when the fast which they thought would pressurize Government to run for cover, got extended due to royal ignore that they received. Do and Die I thought was to achieve objective (now what was that!!!) not Death of the Movement. Done… You made it 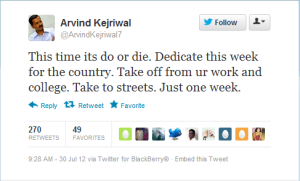 Couple it with dwindling support – all due to the grandstanding of Team Anna, they knew their time has come, the time to write the epitaph of a movement that the world never saw before and thanks to these bunch of jokers, we could never hope to see again. If I was skeptical about the system so long, today I am also skeptical about such movements – NOT AGAIN is a ticked item I have carved on my Thought-Rock. A  “Do or Die” requires a supreme sacrifice, yes! maybe someone’s life  (I may sound too cruel here, but then I did not call for a Fast unto Death) which apparently none seem to have been ready. Obviously with benefit of hindsight, I can emphatically state that there was nothing noble about these players. Repeated fasts and threats of agitation was just a blackmail and helped the ruling coalition to neutralize the entire movement.

It is simply a case of bloated ego, could not handle reduced crowds – movements of this kind is long-haul and doesn’t ride a peak all the while. If we cannot stay the course, call it off before even it starts. But then surging crowds was heady stuff, intoxicating and enticing – forcing Team Anna into a false sense of  possessing “Bigger than JanLokPal” kind of power. When you call and go on as regular-as-Ekadashi” fast, expect the momentum to also waver. It took 2 failed fast, both of which had to be called off without achieving an iota of goals that was set out. Reasons – in both cases Anna and Team Anna did not anticipate a low public support that they expected. Why not – people expect more than rhetoric. from mere slogans to action, from  highlighting problems to tangible workable solutions. August 2011 was with tall hopes and over the year August 2012 was a case of shattered dreams. Yet another bunch of ambitious, vile protagonists who essentially was sailing as part of the same system, who tried to veer out but had to strength of will nor ideological steadfastness to go off-course.

Coming to the Corruption related matters itself which was supposed to be the main agenda of this movement – the moment these bunch of self proclaimed core team started to color the Corruption – the signs of beginning of end started emerging. If at all any noise was made , it was almost always on leaders of the Opposition (which we know anyway would be done by the ruling combine) and never once against the members of ruling coalition. A spontaneous protest by the volunteers in front of Prime Minister’s residence, promptly receives an apology. Yet another protest in front of the Agriculture Minister (his record on corruption needs no mention) again is promptly regretted.

Inadvertently Gopal Rai blurted out that battle was never for a Lokpal (please note the usage of the term, not even Janlokpal which we thought differentiated the Sarkari LokPal) but to bring a people’s government to the country 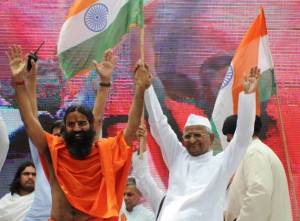 PS: I do have some Personal Text Messages which as is not their wont I would like to keep anonymous unlike Salman Khurshid who divulged what transpired between him and Anna Hazare ji. Any one’s guess who had sent me the message on midnight of September 11, 2011

“This movement has caught on with public, requires no Spiritual Leaders – it is a Che Guevera type movement and such Religious leaders can be expended” Happy Birthday anyway

Dear “Whoever Sent me that Message” ! Eat your hat. I have the last laugh!!! In land of Rishis and Sants, any Movement to succeed indeed needs support and blessings of Baba Ramdev and Sri Sri Ravishankar and most importantly the RSS and VHP who tirelessly backed you earlier.

YOU JUST LOST A GOLDEN CHANCE TO MAKE HISTORY