Reams of Newsprint has been expended, Hours (or calendars) of Airtime broadcast, Terra bytes of data uploaded maligning this person, notwithstanding the fact that Court write thousands of files with orders absolving him of any complicity. Why should it stop? A whole new industry was spawned, mothered by “The Family” and their cronies who saw biggest danger for their very existence and “Joyful” living at our cost, in this man who has been called all kinds of names. This industry thrived for 11 years on sustained barrage of attack against a “Constitutionally” elected leader of the most progressive state, not just this time but 3 more times, an industry that consisted of Media, NGOs and “Bought-out” Officers of the same regime, with carrots of power and lucre dangled in front of them.

But then good times (just like bad times for some) doesn’t last. The Empire is surely crumbling – the carefully nurtured, cosy nest is now stirred by Karma. Truth Triumphs we say yes, Satyameva Jayate. Cobwebs of lies however thick or dense gets cleared.

He,  a man who on 143rd day of assuming office faces managing a daunting situation as a result of “deliberate” burning to death of passengers on a train.

He “who was refused assistance” by neighboring states (co-incidentally all ruled by his opponents) when he sought augmentation of the security forces – even there, lies were being spread, check exhibits at the end of this piece. What these cronies forget – once you get something up on the web, sticky place that web is always retains traces (and trails). Army was called in shortest possible time (in fact faster than other places where rioting is the norm than exception)

He, who brought a this disastrous situation under control admirably (not my words, courts after courts vindicated and appreciated his stand) within 3 days and after that day in March 2002 this state under his watch never, yes never saw a communal incident/riot, or a terrorist act.

He, a people’s man, against whom shameless elected members of this great Nation Petitioned a a Foreign President, But he rebuffed an attempt by that Government’s representatives when they called on him refusing an appointment because he stood by our diplomat who was insulted in that country.

He, who on a trip abroad, defended the CM of a state ruled by his opponent party which saw inept handling of a automobile manufacturer plant crisis.

He, the leader of a state whose Progress and Development story were dissected to the minutest details and taken potshots at while foreign powers saw benefits – political, economical and strategic –  of engaging with a Progressive and Visionary for mutual benefits

He is the Dictator, He is Maut Ka Saudagar, He is the Man who comes riding a Horse to solve all problems, He is a murderer, He reminded EnglishPanini of Hitler, He supervised Pogrom, He presided over the Holocaust, He is Communal, He is a liar, His Development Stories are all fake, He is plain lucky, He is all rhetoric, He is one who faces a setback no matter what happens anywhere, He is divisive….. and so on

He is Narendra Modi – the Prime Minister Designate and a Leader who made this whole industry spawned by CONgress and their cronies redundant. Main Stream Media was simply ignored &  He reached out to people directly through the Media of the future – The Social Media. He sets the agenda of discussion for weeks and months together for the opposition and the Media. He overcame all the obstacles erected, and led the state to greater progress by the day – where he instilled (or restored?)  “Asmita” of this enterprising populace. Everyone was proud to be a Gujarati or happy to do something with Gujarat. Proved that “Anything” is possible, a state where development was not only done, but impacted day to day life of “you” and “me” A state where even staunch opponent, Congress/Communists sent representative to study and emulate. That is what this Man realized with all the challenges thrown around him. He is manifestation of that famous saying  Build a wall using Bricks thrown at you. The Man for whom people are ready to pay and listen too (in the land where truckloads are paid and brought as audience), and here is the the Man who incidentally inspires Hashtags on Social Media  too

He is the person who was thought dangerous by an Opposition leader because – He is fiercely Ideological, he is Incorruptible and He is too Nationalistic. He rouses millions of people with his call of Bharat Mata ki Jai, His Vande Mataram reverberates so dangerously shaking the foundation of Secularism (sic) said this so called opponent. Yes, it is on record. These qualities make Narendra Modi dangerous and hence have to be very careful about him, said this Honorable CONgressman.

After a day when a Metropolitan court absolved him (the last case) – Check Time line of Sri Vijay on Twitter dated 26th December for amazing facts on the entire legal process where Modi triumphed all adversities.

While there check out on the Teesta Setalvad misdeeds who made a fortune lying and fronting against Narendra Modi for 11 long years. Someone who had vamoosed for long suddenly surfaced 2 days ago in fond hope that the court order would favour her. She has been most fiercely vocal (& vicious) peddling lies, making witnesses issue false statements and the last straw for a drowning activist Zakia Jafri, the hapless widow whose personal tragedy she tried to milk fell apart. To demystify her persona and bust her lies, you only need to search on Google for – Kasuar Banu, Zaheera Sheikh, Rais Khan Pathan, Gulbarg funds misappropriation. 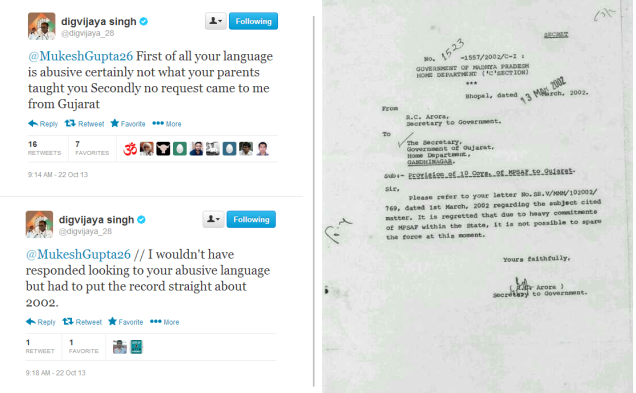 Is this a piece of a sycophant! Oh yes! By all means Judge this piece any which way. I am Proud of having written this tribute to my Man of the Future, My Man for India, My Man for all Right Reasons.

Finally Inspired by this Man… I took the plunge for the first ever time in my life. A Membership

9 thoughts on “My Man of the Year (And the Future)”